Andrew Jackson Beard was born a slave in Jefferson County, Alabama, and spent the first 15 years of his life as a slave on a small farm. A year after he was emancipated, he married and became a farmer in a small city outside of Birmingham. Beard was a farmer near Birmingham, Alabama for some five years, but recalled making a difficult trip to Montgomery in 1872 with 50 bushels of apples drawn by oxen. He said, “It took me three weeks to make the trip. I quit farming after that.” As a result of his extensive farming experience, he was able to develop and champion his first invention, a plow. In 1881, he patented one of his plows and sold it, in 1884, for $4,000. Three years later, on December 15, 1887, Beard invented another plow and sold it for $5,200. With this money he went into the real estate business and made about $30,000.

Beard’s most important invention would be patented in 1897, the “Jenny” coupler. In the early days of American railroading, coupling of rail road cars was done manually. Car coupling, an extremely dangerous practice, required a railroad worker to brace himself between cars and drop a metal pin into place at the exact moment the cars came together. Few railroad men kept all their fingers; many lost arms and hands. Even more were caught between cars and crushed to death during the hazardous split-second operation. His idea secured two cars by merely bumping them together.

Beard invented the Automatic Railroad Car Coupler, commonly called the “Jenny” coupler, and the patent for his invention was issued on November 23, 1897. Andrew Beard’s invention, which was improved in 1899, is the forerunner of today’s automatic coupler. Unfortunately, Beard’s life, after 1897, is a virtual mystery. He died in 1921 yet no record has been found of where it happened. Beard was inducted into the National Inventors Hall of Fame in Akron, Ohio for his life-saving invention. 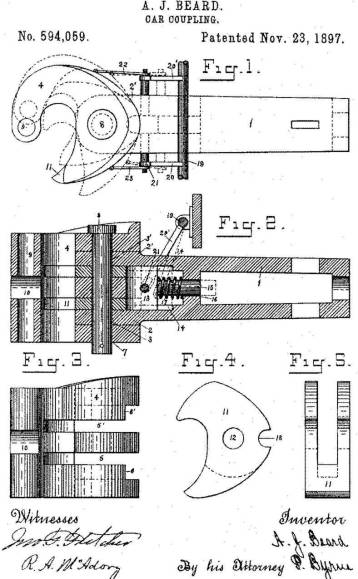