So it’s been a few months since the first Sample School and I think now is as good a time as any to give the 2nd lesson. If you’re unfamiliar with the concept of sampling or what Sample School is at 3GW, just click here to find the earlier post and get caught up.

So in this lesson you will be able to see 2 different types of samples at work. One will feature the lyrics of the original artist, while the other will feature a piece of the melody of the original artists’ songs with no lyrics. Now some may find this difficult to understand by mere mention alone because 1) the use of samples can be simple & obvious on a lot songs, but if the listener doesn’t know the original song it can sneak by before they know it was ever there. And 2) if you don’t pay close attention to music that is thought to be “original” it’s easy to miss when a sample is being put to use. But after the completion of today’s schooling you will see examples of how these 2 things happen and be another step closer to recognizing when they are done on other songs.

Now before we get into the actual examples I want to first bring up how often people I talk to don’t realize where some music originates from. I don’t mean where the artist who performs the song came from nor do I mean where the song was created. I specifically mean that even if someone knows that a newer song was created from a sample, that’s about all they know. If they are more musically inclined than most they may be able to tell me who the artist is, but if I ask them another fact like what group the original artist was initially in, or better yet, what’s the race or ethnicity of that person the answer is either wrong or non-existent. A perfect example of this is demonstrated in the music featured below.

I start by saying to you, the reader, before you go any further (and before you cheat by searching for the answer to the question I’m about to ask), what do the above 3 artists all have in common? Well for those that are truly interested, they all were born in the state of New York. One in Harlem, one in Brooklyn, and one in Manhattan. I thought it was quite interesting, and another way to see how things may be easy to miss if you just assume they are straightforward.

This brings me to the first example of sampling. The first song is made by the supremely talented and oh so smooth Mr. Bobby Caldwell. Many people may not know much about him, but I guarantee if you’re a fan of R&B, hip-hop, or gangsta rap then you are more than familiar with his music. Take the song below. What You Won’t Do for Love was released in 1978 and was the first single of an album by the same name. It may be Caldwell’s most popular song in his successful music career, but the thing that surprised me most after I heard it was the gentleman singing looked nothing like what I pictured. (If you haven’t looked already just wait until the end of the post).

The next song comes from one of the most notable and recognizable rappers to ever hold a microphone. Most people know Tupac (2Pac) Shakur had a prolific career in the rap game despite being cut down in his prime. You know you are a once in a lifetime talent when 1) you are always rumored to still be alive after you have been confirmed to be dead and 2) you have a hologram made after you that still gives performances. This is of the countless songs made before his death and eventually released posthumously by 2Pac. Do For Love was debuted in 1997 and comes off his R U Still Down? album. It brings an interesting twist to the original song from which it came, but its lyrics make for a great story nonetheless. In this song 2Pac tells how he’s constantly staying in a relationship that seems to be going nowhere because of arguing, lies, and cheating, yet he stays because he is a self-branded “sucka for love”. Now in this song you should be able to easily tell where the sample comes in now that you know where it comes from and obviously uses the lyrics of the original song. So here is part 1 of the 2nd lesson of Sample School.

This next song from Mr. Caldwell was also featured on his 1978 album and would be the 2nd single released. Even though it did not reach equal heights of success as the 1st single (showcased above), it was thought that this song would be the more popular and standout single on the album by Caldwell himself. It is definitely soulful and is easy listening at its best, and it’s something that I think can be listened to on repeat without getting old. Here is My Flame, a classic soul song  to say the least.

This brings us to our 2nd example of sampling. Now this may elude most because if they have heard the song below without hearing the Caldwell song they would think it is an original creation. Sky’s The Limit was made by hip-hop/rap legend, The Notorious B.I.G. and features vocals of the R&B group 112. It comes off his Life After Death album, which was released in 1997 (the same year as 2Pac’s joint). In this joint, Biggie tells the tale of how life wasn’t always about roses & riches in his younger days, but goes on to showcase his “skills” in various areas of life & keeps pressing on to reach ultimately the top of the game. B.I.G. was also cut down in the prime of his career, but still is viewed by many as one of the all time greatest rappers to do it. I can only think a part of this stems from his ability to paint a picture within a song that almost takes the listener to exact time and scene he speaks of. You can see this talent on display in the song, as well as Juicy, Warning, Big Poppa, etc., and if you pay close attention to the music which accompanies this unparalleled lyricism, you can hear the actual original melody. There are no lyrics used in this sample, but it’s still a classic sample in my book. Here is part 2 of the 2nd lesson of Sample School.

Well that’s it for the 2nd edition of Sample School. As always I hope you learned something, and in case you are still waiting to see what I meant when I said he looked nothing like I pictured, you can see the picture below. Thanks for reading and thanks for listening. 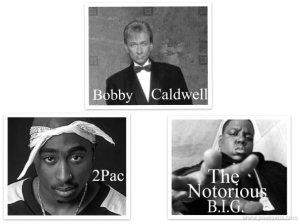